Making my shift as a crafter/artist

Its interesting I’ve been a crafter all my life and strived to change and grow into a “fine artist” in early 2000 I started studying fine arts with an emphasis in sculpture at the University of West GA. I attended part time often only able to take 1 class per semester.  I was at that time engaged and a single mother of a teenage daughter. With in the next 9 months I had become a newlywed, started a new  business in a very male dominated industry working ungodly hours, still a mother of a teenage girl, and the primary caregiver to a live in grandmother in-law with Alzheimers.  But through it all and with Chris at my side I continued studying and learning more about fine arts.  We even moved to a small university town making it easier on me to continue my studies. After several offers from national companies I decided to sell my business in 2008. Again with my best friend, hubby and (ex-coworker) Chris at my side we decided to take some time and travel the US by RV.

Our RV choice a Deluxe Lance truck Camper over a 4WD , Dodge 2500 Dully. With a front hitch for our off road bicycles and rack. We were ready for anything….?

In the late 1990- to 2008 and prior to selling my home and business in 2008 to travel our beautiful country almost all of my art work was consumed with political and social public art. From paintings to sculpture I wanted to share what I was learning and my concerns about the direction that I felt we as Americans we were being lead astray.

I was painting about our alarming uses of natural  resources and about the destruction and the exploding debt ratio and what that burden of that debt would eventually mean to us as individual and our nation.                                    Little did I know  just how on target I was with that one it just came sooner than I expected it would 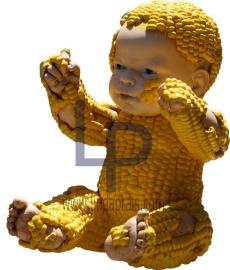 These are just a two pieces that are from that time. 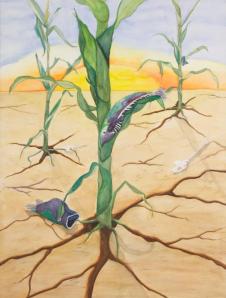 Robbing Peter focusses on my concerns for our need to take from one natural resource like water, to produce a fuel source (Ethanol) that would be yet again controlled by big businesses. The cost of which I feel is too high.